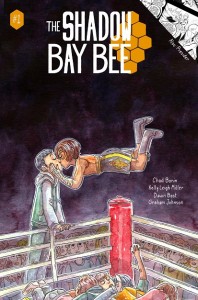 Early in 2015, I was lucky enough to work with Kelly Leigh Miller (Rose Moon Lake) on The Shadow Bay Bee, the beginning of a new comic series about a girl, a boy, her superpowers, and their relationship. Initially published on tumblr, the story was split into easily-digestible short stories, later compiled into a collected edition that featured a new wraparound story. In addition to Kelly’s work on co-creating the world of The Shadow Bay Bee and performing art duties, the collected issue includes a backup story, Presider, featuring the heroine who would be President of the United States of America, with art by Dawn Best (Archie’s Sonic The Hedgehog, Sylvanna) and lettering by Graham Johnson (Of Stars And Swords).

As it stands, there’s potential for more stories when schedules and finances allow. I’m currently (and plan to forever) offering the basic version of issue 1 for free here. I call it “basic” because I do have aims for a paid deluxe version with extra content, such as commentary, extra art, and more as backmatter, for people who would like to support the book and go a bit behind the scenes.