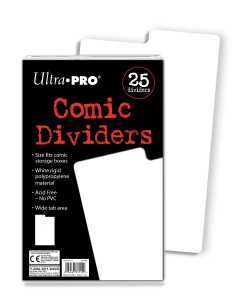 Helpful in both dividing comics and bringing order to a comic-collecting mind.

Comic dividers are an amazing tool at helping you keep a bit of sanity, but are not required. If your comic collection is well-enough organized and concise, you may desire to avoid these relatively-expensive (a pack of 25 runs about $15ish, so you’re looking at 60 cents per) pieces of plastic.

My own personal mindset is that only runs of ten issues or greater will get an individual comic divider. This knocks out mostly anything that wasn’t released as a mini-series. There might be easy ways to pair them with other titles that work for you. For example…

My personal plan is a bit of a hybrid:

I shy away from temporal or brand divisions, but that may work for you.

Without looking in each box (or on labels affixed, as we’ll talk about), though, how do you know which box to go to?