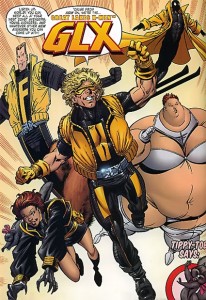 They’re the Great Lakes Avengers… or X-Men… or Champions…

I’m oddly exacting about how I want to organize books. My comic dividers put most modifiers behind the actual title, and include a year.

So, while the run that started with Joss Whedon might theoretically just be listed as

is, in my collection,

This allows, in an ideal world, for it to be placed alongside other X-Men titles if an ABC consistency is allowed/desired, and including the year it was launched gives a good (but not perfect) way to separate the title from it’s 1995 iteration and any future volumes. A best bet to see what year a comic started is comicbookdb.com.

For some books, this leads to some oddities.

SUPERBOY (2011) and SUPERBOY (2011) are a problem I’m vaguely avoiding, for one is Jeff Lemire’s “black shirt and jeans” pre-FLASHPOINT book, while another being the Scott Lobdell “super-bodysuit” NEW 52 iteration. For this, I’m going to roll with SUPERBOY (2011) I and SUPERBOY (2011) II; situations like these are rare, thankfully, but Marvel just tossed a bunch of them with ALL-NEW, ALL-DIFFERENT MARVEL relaunching books like SILK, SPIDER-WOMAN, HOWARD THE DUCK, and THE UNBEATABLE SQUIRREL GIRL within months of their previous iteration’s #1.

Also, titles that may actual lack a colon, but make sense for me mentally (especially in the case of a indicative divider), I might add.

exist in my collection as

Additionally, I’m completely unsure on how to tackle a book that jumped back and forth on numbering, such as ACTION COMICS or THE AMAZING SPIDER-MAN. My current thinking is to just set any re-numberings as a new volume, but as I get to these issues, I’ll handle it more.