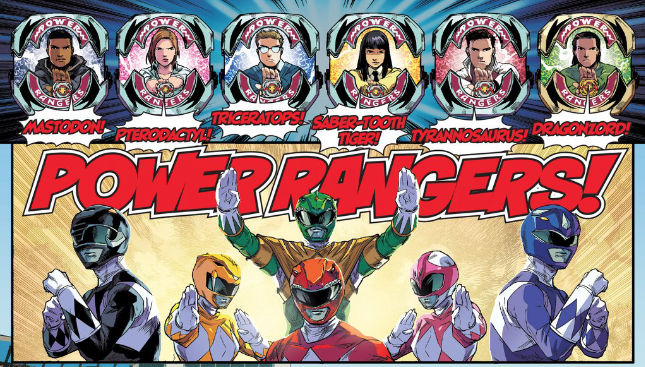 Does the comic thrive without budgetary limitations for special effects?

23 years after the franchise premiered in America, BOOM! Studios has brought back Mighty Morphin’ Power Rangers as a brand-new, ongoing series of comic books. Set immediately after the events of Green With Evil, the series focuses on Tommy’s rebirth as a member of the Power Rangers after being their greatest threat. I’ll be looking at the series issue-by-issue, noting references and schisms to and from the legendary television series as part of my Henshinformation series of Japanese superhero-focused media. Henshinsights gives a bit of insight and thoughts on our henshin heroes. 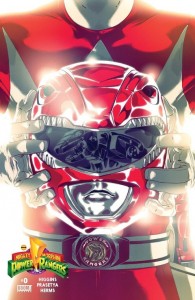 Couldn’t Do That On The Show 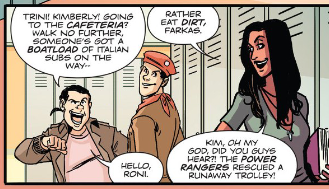 The Rangers have teachers other than Ms. Applebee. Clearly, that’s a stretch beyond the budget. Coupled with Nondescript Teenage Roni (which could theoretically be a nod to the the 2015 Archie reboot’s version of Veronica Lodge, but that may drastically be reading into things and looking at designs at little too much), and it appears the book may be wanting to go above-and-beyond at world-building. Name how many friends the Rangers had that weren’t in the credits, lasted more than one episode, and didn’t exist to outright imply to the actors “you can and will be replaced” on a daily basis.

Additionally, the tussle with Bullzor seems to take place at the San Francisco Bridge, which is one of the many locations you’d never actually see in the show, unless it was stock footage. Given that more than half the franchise has been filmed in New Zealand with the intent of being America (and even the first movie was filmed in Australia), seeing real-world landmarks is a rarity. Coupled with the fact that the Megazord and Dragonzord are battling knee-deep in water, and you have a fight that would be unheard of in Toei’s budget.

Finally, and most abstractly, Tommy’s dream/vision at the beginning of the issue, showing the destruction of the Power Rangers at his hands, would have been both a bit dark and budget-prohibiting for the original series. In only a few panels, you have a few sets that might have been more than the original season could handle (even if it’s just wreckage, it’s beautiful wreckage), alongside cracked visors (that smartly keep things all-ages; even if the series would feature greater damage to the suits, Power Rangers were always clearly alive… which these don’t seem to be).

Billy sends everyone push notifications. Billy has officially become an insufferable app developer that doesn’t let you opt-in for push notifications. On that side, though… if it’s 2016 and everyone has smart phones, why do they also have communicators? Wouldn’t it be significantly more clandestine for teenagers to be playing with their phones all day than having watches that don’t have faces? Are they telling people they’re FitBits or something? 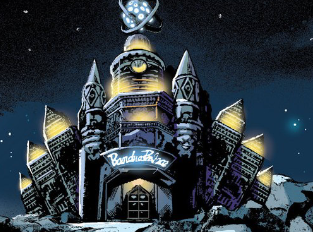 Haven’t gotten around to changing the old owner’s sign, yet.

Rita’s moon/not-the-moon castle (seriously, it’s never actually made clear in the show) is still labeled “Bandora’s Palace” (a leftover from the Japanese show, in which Rita’s name was “Bandora”). Generally glossed-over and never referenced explicitly, including it in original artwork now begs for a backstory.

In the epilogue to the main tale, Scorpina finds a crystal in the story, which may refer to any number of magical crystals in the franchise, but if it’s referring to a certain one, it’s beyond my memory.

Get me the original artwork for the drive to school? I want to see the pencils where it looks as if Rita’s just on a road trip with Tommy and Jason.

The ride to school got a little weird when mandatory carpooling extended to moon palaces.

Bulk and Skull have a fairly entertaining tale, as much can be done in two-pages, but it sets up a time-honored tradition of the series: Bulk and Skull trying to become Power Rangers just to attract Kimberly and Trini (Bulk shows no apparent interest in Roni, the aforementioned “we might as well have another character if we’re not limited to paying actors” friend of the girls).

Additionally, Mr. Caplan may have the most insane concept in the franchise, and this is one where robots riding horses on the moon that has an atmosphere is not in question.

I think he just broke a bit of science.

Does he open the jar and the terror of an adult regularly savaged by the school’s resident bullies come blazing out, or is he actually filling it with the rage-powered spit lobbied from his mouth as he screams?

Rita, sounds like you’ve got a new monster on the way: Screaming Jarhead.

In March, the revival starts in full with #1. Until then, go support the series at your local comic shop (if you’re in North Georgia, I prefer Great Escape Comics & Games) and Comixology. Don’t pull a Chad and buy all five regular variants, the 1:50 variant, the 1:100 variant and set up an eBay alert for the variant that features the Red Ranger with the Dragon Shield, because that would be insane and I’ll fight you for it. God help my wallet if they do a variant with the Black Ranger in the Dragon Shield.