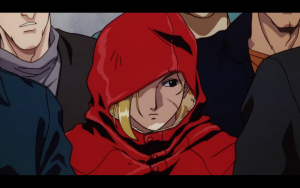 Ryu is a lone wolf, wandeing the world in search for the perfect fight and more power. His combat power is off the charts, and it’s the desire of Shadowlaw’s leader M. Bison to capture and corrupt him into his world-domination schemes. Ryu’s not interested in working for the psycho power in charge of this evil organization, and he’s not the only one against him. INTERPOL agent Chun-Li must work with American operative Guile are both out for revenge against Bison as well, each tracking down the villain for their own purposes. All of the legendary World Warriors are gathered in Street Fighter II: The Animated Movie, but it’s an action movie from the early 1990’s; is there any plot driving your favorite characters forward, or are we just placing quarters in the machine for some fun fights?

Street Fighter II: The Animated Movie was released in Japan in late 1994, about at the height of “Street Fighter VS. Mortal Kombat” war of attrition we all enjoyed in that decade before polygons would redefine gaming. In 2016, we’ve survived multiple animated films (good and bad), live-action features (so bad it’s good and so low-budget you’ll appreciate it), animated series (some bad and… well… tolerable), and a surprisingly-amazing long-running American comic book series that’s done well to enhance the characters and adapt the games. This was, therefore, before much of the franchise’s surprisingly-consistent story was decided on, and is largely extrapolated from charater’s bios and endings from the games. All the fighters from up to Super Street Fighter II Turbo make appearances in the film, but the plot largely focuses on Ryu, Ken, Guile, Chun-Li, and M. Bison… who honestly will boil down to the franchise’ core. Many attempts to graft other characters of import to the franchise (Alex and Gill as the main character/villain replacement in Street Fighter III, for example) tend to inevitably fall by the wayside. 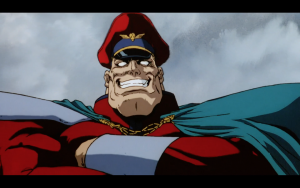 To place it simply, this from a weak era of the franchise’s evolution, purely focused on adding more characters and honing the Street Fighter II gameplay experience instead of adding a true narrative, and partly why it was so simple to cross the franchise over with brand’s such as X-Men in this era: don’t worry about the story, because there isn’t much of one, and just enjoy some fitsticuffs.

You need to approach this movie with the same mindset, as it’s very light (and a bit befuddling) on the plot. The general synopsis is that M. Bison (“Vega” for you JP purists) is out to make Shadowlaw (generally referred to as “Shadoloo” nowadays) a more-powerful terrorist organization by abducting the strongest fighters with the use of andorid combatants. When Bison can’t acquire Ryu easily, he gets his partner and second-best, Player 2 (also known as “Ken,” also known as “Ryu in Red,” also known as “The One With Actual Personality”). While Ryu is a stoic world-traveler, Ken is wealthy American (half-Japanese, for you pedants) who has a steady girlfriend and a sense of “how to use a bar of soap.” Parallel to the Bison/Ryu/Ken plot is one where Chun-Li and Guile, the Chinese and US government officials and the only source of actual, active law enforcement in this movie (minus a few helicopters near the end) are chasing down Bison because he’s evil and has killed friends/family. Over the course of the movie, all of the Street Fighters will make cameos, ranging from vaguely-racist voicing of Dee Jay, moderately-accurate motivations for Sagat, or a Fei Long that was probably voiced by Bryan Cranston (though you’ll be hard-pressed to find an actual confirmation of this acting due unions and such), or an Akuma cameo that I’ve missed on two viewings. 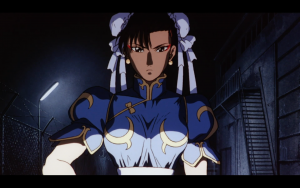 There are some great fights here (the final fight [ha!] of Ryu and Ken versus M. Bison was so revered that the first game after this movie, Street Fighter Alpha, created a two-on-one mode to replicate it), but the plot is just laughable. Chun-Li and Vega get a good bedroom fight (one of the few scenes where a character is not in one of their video game outfits); of note, it’s preceded by the franchise’s only instance of topless nudity (which, well, it was a 1990s anime adaptation of a fighting game; be glad it’s this restrained). It’s competently built up with a fair amount of suspense, as Vega stalks Chun-Li in her own apartment (as an aside, there’s a great musical transition that’s completely lost with the US soundtrack during this build-up), but then there’s a fair amount of absurdity with Chun-Li throwing a couch, as one can do with her lithe frame. Other absurdities include E. Honda and Balrog (oddly enough, best buddies in the live-action film, but ardent enemies in this animated work) rolling off a cliff to their presumable death, but surviving (the “oh shit!” dialogue alternative is as laughable as Ken’s naming of Bison “Buffalo”) parallels Guile’s flexing in front of an unconscious Chun-Li as a step beyond an intended joke and into an unconscious higher-level of humor. Factor in the nonsensical aspect that everyone is from a different country and yet all speak the same unifying language (English or Japanese), and you get something’s a special level of entertainment.

The last scene (spoilers for a 22-year-old movie) where Bison attempts to drive over Ryu with a truck is just nonsensical (especially the random “Chaser!” Ryu yells, depending on which audio track you’re listening to), and the fact that the credits end with a promotion for the Jean Claude Van Damme film seems to sum up the film; this existed purely to be a promotional puff piece for the franchise.

Problem is, it works! A few aspects of the franchise they get undeniably correct, and the aspects that don’t work would just invariably be fleshed out in other avenues (the Zangief/Blanka fight could be fully excised from the film and the characters would have had a more-consistent tone over the franchise; at this point, they’re just a wildman and a Russian braggart, not a sympathetic “monster” and… Russian braggart, yes, but one who encourages the best in others). It’s still entertaining in an absurd action movie way, and much like the sister live-action production, the over-the-top nature makes it more memorable than if it was more coherent. 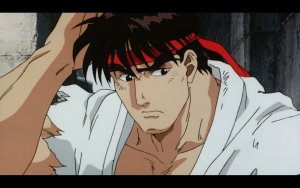 Certain aspects of the film are great, with better-than-average voice acting (beyond the presumed Bryan Cranston, one voice reminds heavily of Steve Blum) and impressive backgrounds throughout the film. Character designs lean heavily into the video game pre-existant, and while the style they’re rendered in is pure definitive of the era, it’s not nearly as retroactively-iconic as Masami Obari’s comparable work in fighting game films of the era. Dialogue is forgettable at times, but Bison’s “Evil is a good career choice. It has a lot to offer.” is iconic as much as Raul Julia’s “Tuesday” speech that actually sums up the character and is remembered beyond the movie it came from: Bison is self-interested force of nature who has no qualms being power-mad, destructive, or otherwise outright evil.

If this was simply a re-release of the movie on BluRay (technically not the first iteration of this movie on BluRay, but the previous release was only included in a multi-game collector’s edition with a standard-def, edited copy of the movie), this would just be a forgettable release that would be an eventual buy for fans of the franchise, and that would be it. Discotek has strived, and succeeded, at placing a substantial amount of extras on the disc. You have both JP and UK trailers (including some for the JP album) and the expected variants of opening and closing credits. Variants? Street Fighter II has a litany of variations over the years, going from the rawest Japanese-language version to the television-edited US version, not bypassing the extra-sweary UK version (if you ever wanted to imagine a Capcom character yelling “get f-cked” to Bison, you’ve got it on here), alongside different soundtracks (the licensed music of the US version versus the original Japanese soundtrack). Thanks to some effort, there’s the uncut version of the film with both English-language and Japanese-language dialogue and soundtracks, alongside the PG-13 English cut of the film with both US and Japanese soundtracks, and that’s not even counting the various stereo or 5.1 (or even isolated score) mixes included in this release. Special features, including the pair of video liner notes, explaining the variations and showing the alternate dialogue takes from the various levels of intensity dubbed, while textual liner notes cover character bios, transalation notes, and facts about the production history. Galleries show off various aspects of the production, but the real treat of the production is that the disc has FMV footage culled from a largely-forgotten video game adaptation… of the movie that itself is a video game adaptation. It’s a small plot where the player is one of the androids and attempts to take out Ryu.

Street Fighter II: The Animated Movie is not a great film, but it is a highly-enjoyable cluster of scenes and segments added together that will entertain, and the disc is significantly buoyed by an impressive amount of extras and polished presentation throughout. To fully experience the disc and all the variants of the movie involved would take the better part of an entire day. Discotek has been knocking it out of the park with their fan-powered releases, and this is truly a Super Move of a release.

In the interest of disclosure, a copy of the film was supplied by Jose Argumedo, an editor on the special features and a personal friend. While I later purchased a copy, the review strived to be as impartial as could be.