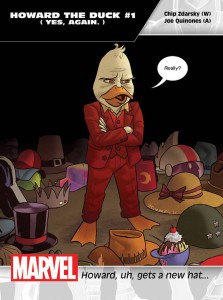 Marvel’s promotion for the second #1 of a certain book in the same year even acknowledged the quick turn-around of these stories.

The current release plan for most comic books does not promote legacy. DC’s titles, none older than September 2011, are just hitting the high 40’s at most; Marvel’s giving everything a new number 1. In the past, Action Comics reached 900, The Amazing Spider-Man in the high 600’s, and so forth. The highest-numbered comic I collect is Sonic The Hedgehog, hitting 300 within months.

If you had your comic collection completely ABC’d, a new title like A-Force would require shoving between Action Comics and Avengers, which means that, once that box is full, do you add another to the front of the collection, or between Avengers and Batman?

Marvel is heavily against high-numbered titles, choosing to relaunch a book with a new number #1 than continuing, especially if there’s a new writer or concept in the book (for example, the aforementioned X-Men launched with the concept of being an all-female team, and didn’t change numbering when a new writer took over, only likely because she seemed appointed to be a “filler/try-out” writer before the book’s planned obsolescence of Secret Wars ended it). DC’s a bit more resistant, with a significant shift in Wonder Woman and Batgirl in tonality, demographic, and creative team kept the former numbering, but struggling titles that DC’s still likes the general concept and market-awareness of, Teen Titans and Suicide Squad, completely relaunched with new #1s in an attempt to distance themselves from the recent past and drive more sales (an issue #1 is always going to be more approachable than issue #36 with a “New Creative Team! New Direction!” tag).

As it stands, you’re going to have many short volumes from this point on.

This is far from a bad thing for the industry. Publisher might be more willing to give an odd take on a character or title if it has a built-in short shelf life, such as 2015’s Bizarro or the “it won’t last forever, obviously” volume of The Superior Spider-Man (in which Doc Ock becomes Peter Parker and makes everything good in his life). It may make things a little odd for collector’s used to hundred-issue runs that span decades.

My personal mindset? Keep one box (or four or seven boxes, I don’t know how much you buy) as a “unfinished books” section, and then backlog it when the volume’s over, your desire to read it ends, or gets to the point where it wouldn’t fit in one box anyway (I may have to consider that with Sonic Universe, a title that’s only at the halfway point for a short box in issue count, but may reach it with the amount of variants.

Your boxes may not have a completely-alphabetical tilt to them. You may have a volume of X-Men, every issue of Flashpoint, every issue of Before Watchmen, and the whole run of The Superior Spider-Man next to each other, and that’s fine. You can try to go a bit alphabetical within each box, and that’s fine and helpful, but you won’t need it with most boxes; unless you buy 100+ single issues, you’ll have things organized enough that within a few flips or glances, you’ll get to the book you want.

It’s 2015. You have easily searchable databases.

I prefer Apple’s Numbers, but that’s me. You may prefer Google Drive or Microsoft Office 365. All of these applications let you make spreadsheet’s with multiple pages, and all have a search function. If you want to find what box has a certain issue of Howard The Duck, you can just start typing “howard” into your spreadsheet’s search function, and you’ll most likely only have a few items pop up: Howard has had six series over five decades, and you most likely don’t have a bit of each.

Part of the beauty of going for an easily-searchable online database is that you can have your entire comic book collection in your pocket, on a phone or tablet (if you have rather big pockets). Trips to a comic book store in a town you’re visiting can be improved by the fact you can load up the relevant app on your device, have your database available within seconds, and see what holes you have and what you’re looking for.

If you’ve decided that you’d like to go this route for your comic book collection (inventoried boxes versus floating alphabetical organization), that’s great! Here’s how I’d get started.